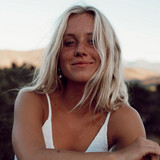 Hope Waidley is a radiant 20-year-old singer-songwriter, guaranteed to grab your attention with her chill-inducing, honest, and powerful vocals. As a self-taught singer, lyricist, and guitarist from the age of six, her music is visceral, speaking directly to the soul, and has been compared to the likes of Amy Winehouse, Janis Joplin, Mazzy Star, and Stevie Nicks. Originally from a small town in Michigan, Hope is now living outside of LA, working on music full-time. She recently signed a deal with independent record label 300 Entertainment. Hope is releasing her next EP titled Wonder this May and has already released the first single “Born Again.” Since the launch of her career in 2017, she has amassed almost 40,000 monthly listeners on Spotify and over 10,000 followers on Instagram. Hope has gained praise from outlets such as Elite Daily, Flood Magazine, Elicit Magazine, and more. With dedicated fans, her organic voice, and undeniable talent, Hope is a voice that needs to be heard and will be on everyone’s radar in the coming year.