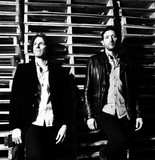 The Nolas are an alternative rock band from Montreal (Canada) founded by longtime childhood friends Joey and Manny.   After years of sharing a rehearsal studio working on separate projects, an impromptu jam session ensued. The session was recorded and as they listened back, they knew they had something interesting on their hands. Shortly after, Fil and Mark joined the group. That initial session had become their first EP which was recorded and produced independently.   The Nolas released their self-titled debut EP in September 2015 to great reviews and attention by the Canadian music community and local music scene.   “Johnny” their newest single was released “Mardi Gras” Tuesday Feb 16th 2021.