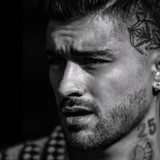 Zayn Malik is best known as one of the founding members of the chart-topping boy-band-of-a-generation One Direction. Born Zain Javadd Malik on January 12, 1993 in the working-class town of Bradford in West Yorkshire, England, Zayn honed his vocal talents and stage command at a young age. Growing up as a mixed race Pakistani-English Muslim in a post-industrial British town presented some difficulties, which resulted in a number of primary school changes. His talents were eventually fostered at Tong High School, where he delved into performing arts and stage production, even starring as Danny Zuko in the school's production of Grease. In 2010, he auditioned for The X Factor but was eliminated (along with his future One Direction bandmates, who also auditioned solo). The quintet was later brought back as a group and Simon Cowell dubbed them One Direction. Despite finishing in third place, their popularity exploded and would not slow their trajectory until the very end. After the show, Cowell immediately signed them to his label, Syco Records, kicking off a craze that hadn't been seen since the turn of the millennium with the Backstreet Boys and *NSYNC. From 2011 to 2014, One Direction released an album each year, each one more successful than the last. Their fourth album, Four, would turn out to be the last with Zayn. In March 2015, while the band was on the On the Road Again Tour, Malik abruptly parted ways with One Direction a week after his final appearance with the group in Hong Kong. Citing stress and a desire for a simpler life out of the spotlight, Malik later revealed that he simply wanted to make music that he would listen to and enjoy. Striking out on his own, he signed with RCA Records and moved to Los Angeles, where he began working on his solo effort with James "Malay" Ho (Frank Ocean, Big Boi). His debut single, "Pillowtalk," was released in late January 2016 under the name ZAYN and featured his strong vocals over distinctly more adult-themed alt-R&B similar to The Weeknd and Miguel. The single debuted and #1 on the Billboard charts. His full-length debut, Mind of Mine, was released on March 25, 2016, one year to the day after he left One Direction. ~ Neil Z. Yeung, Rovi