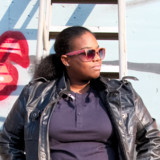 Every now and again the realm of artistry gives birth to an enigma that changes the way in which we think about music. Zee Booker is a leader in the new school of contemporary artists and producers who are combining elements from various genres and re-imagining them in a contemporary way. Zee Booker a multi-talented producer, singer, and songwriter born and raised in Atlanta GA. Zee Booker is a member of the LGBTQ community, as well as an entrepreneur. As a musician, she has had a vast array of musical influences however she accredits the pivotal influences in her music to Alicia Keys, Lauren Hill, and Usher. This varied spectrum of influence has led to the development of Zee Booker the embodiment of originality and she uses her musical acumen and ideas to create an amalgamated and original sound. She also draws inspiration from her own life experiences, feelings, and thoughts. For Zee authenticity is the very ethos that encapsulates her music. Because of this she ultimately developed a style of songwriting that is transparent, daring, and reflective of her experiences, thought, and ambitions. As a singer, her smooth vocals are decorated by effortless intonations that are accentuated by a skillfully resonated voice and soothing warm tones. She possesses a modern-day mix that crescendos with spellbinding emotive undertones.