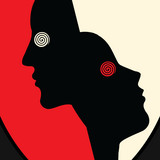 Stacey and Laurie Ann met in Nashville and moved in together in 2011. Having worked on each other’s music projects for a few years they decided they were better off joining forces. They formed The Bloody Nerve in 2013. In 2014 their song Find Ya Love was featured on the TF1 television series "Interventions" in France. The song later appeared on their 2015 debut, Taste. The Bloody Nerve's current project is the ongoing episodic album "All Blood, No Treasure".