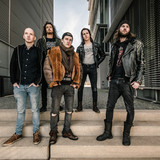 Since the beginning of 2016, Recklinghausen / Germany-based rock outfit TYLER LEADS has been on the map, and despite of their short history, they've kept themselves quite busy in the most professional and hard-working way. How else would they've managed to follow up their debut BURNING SMOKE (2016) within merely one year? Their newest release STAY UGLY (2017) was captured live, which makes total sense, as TYLER LEADS is one hell of a bloody real live act. Again and again, they proof this to their audience, whether it is by winning talent shows, opening for scene darlings, such as DEAD LORD or THUNDERMOTHER, or playing well-known festivals, like the notorious HELLFEST in France. While TYLER LEADS clearly paid their dues, they should have a bright future ahead of them. Only sky can be the limit for these guys. They got the guts, the talent and the right attitude. Just go ask the press or their audience!