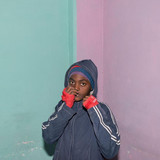 "An unmistakable wall of sound that, accompanied by a pulsating trip hop beat, seems to be headed for arenas and big venues alike." That's how the Belgian press described Slow Burner when it was first released in 2019. Michélé De Feudis, also known as the frontman of the former Horses on Fire, and Stéphane Misseghers, producer and drummer for dEUS, consider their musical brainchild Almighty Mighty to be a Pop Noir-collective, as they themselves call it. Following the example of bands such as UNKLE, Air, and Gorillaz -in which there is constant alternation of musicians and singers- for the recording of their first material the pair teamed up with guest performers. The further addition of Ian Clement (Wallace Vanborn), Stijn Vanmarsenille (Future Old People Are Wizards), Emily Vernaillen (Azra) and Simon Raman (Uma Chine) completed the musician pool and ultimate live line up. During the creative writing process, it was the cinematic vibe in Daniel Lanois, the thunderous turmoil in Massive Attack, the melancholy in Radiohead and finally Bowie's pop music that inspired the duo. Apart from Slow Burner, the collective has previously released Death Parade, a single featuring Tristan on guest vocals. Idle Away Time, Almighty Mighty's newest single, is to be dropped on all platforms the 13th of September and is immediately followed up on the 20th of the same month by the release of their first self-titled EP. A full album is in the works and should be out by spring 2020.