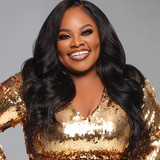 Tasha Cobbs Leonard is a Georgia-based gospel singer, songwriter, and pastor who broke out in 2013 with the powerful Grammy Award-winning single "Break Every Chain." Her musical success continued over subsequent chart-topping releases like 2015's One Place Live and the 2017 collaborative project, Heart. Passion. Pursuit., even as she continued her ministry work as a pastor in Atlanta. Growing up in Jesup, Georgia, she began her career leading worship at Jesup New Life Ministries, the family church founded by her father, Bishop Fritz Cobbs. In 2006, she accepted a job with Pastor William H. Murphy III and his dReam Center Church of Atlanta and spent three years touring the U.S. as part of his musical ministry. In 2010 she launched her own solo career as a gospel artist with the album Smile, released independently on her own Tasha Cobbs Ministries label. Cobbs' career took off in 2013 when she signed with EMI and made her major-label debut with Grace. The album topped Billboard's gospel chart and even crossed over to number 61 on the pop chart, while its lead single, "Break Every Chain," became an even greater success and went on to earn a Grammy Award for Best Gospel/Contemporary Christian Music Performance. Two years later she moved to the Motown Gospel imprint for One Place Live, an album recorded live at the Redemption Church in Greenville, South Carolina. An even bigger success, it too reached number one on the gospel chart and hit number 28 on the Top 200. In early 2017 Cobbs married music producer Kenneth Leonard and and months later, Tasha Cobbs Leonard released her fourth album, Heart. Passion. Pursuit. A guest-heavy studio affair that featured gospel and CCM stars like Kierra Sheard and Anna Golden as well as an appearance from rapper Nicki Minaj, it proved to be yet another chart-topper and was captured the following year in a live version at Atlanta's Passion City Church. Her next project was the 2020 EP Intercession, whose four songs were recorded live at Nashville's Ocean Way Studio. ~ David Jeffries & Timothy Monger, Rovi