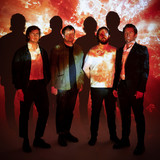 Established in late 2014, Ist Ist have forged a formidable reputation on the back of uncompromising, intense headline shows at prestigious Manchester venues such as The Ritz, Manchester Academy and Gorilla. Through word of mouth and several UK tours, they have grown in size without label or management support to the point where they are outselling established touring bands. The band released their long-anticipated debut album 'Architecture' in May 2020 on their own label, Kind Violence Records. The album charted in the top 5 across the indie, vinyl and physical album charts. Second album 'The Art of Lying' is set for release on 26th November 2021.