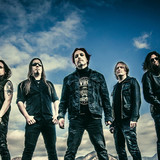 The popular Finnish prog and power metal quartet Sonata Arctica specialize in a soaring, orchestral variation on European heavy metal that melds sweeping, melodic compositions and meaty riffs, lush, expansive production, clean vocals, and sophisticated instrumental chops. Once a hard rock band called Tricky Beans (later Tricky Means), they changed their name for good when they adopted power metal as a genre. Since releasing their critically acclaimed debut album Ecliptica for Spinefarm in 1999, the band, founded by lead vocalist Tony Kakko and drummer Tommy Portimo (its only remaining original members) has registered multiple chart-topping albums, with highlights arriving via 2007's Unia, 2012's Stones Grow Her Name, and 2019's Talviyö. Originally a quartet, Sonata Arctica expanded its lineup to quintet size with the addition of backing vocalist and keytarist Henrik Klingenberg. Unlike many other of the genre's acts, the group only became more popular as the decades passed. Whereas the first decade of the 21st century saw only 2007's Unia and 2009's Days of Grays chart, the second benefitted from high-profile international tours. Their revenues from streaming and album sales increased exponentially with the Top Ten chart success of albums such as 2012's Stones Grow Her Name and 2016's The Ninth Hour.

Founded in 1996, the band, which included vocalist Tony Kakko, guitarist Jani Liimatainen, drummer Tommy Portimo, keyboardist Mikko Harkin, and bassist Janne Kivilahti, recorded a handful of demos before releasing their first single, "UnOpened," on Spinefarm Records in July of 1999. Producer Mikko Karmila (Children of Bodom, Stratovarius, Nightwish) recorded and mixed Sonata Arctica's full-length debut, Ecliptica, and the album was released in 2000 by Spinefarm and Century Media Records. Following a successful tour with Rhapsody and Stratovarius, the group put out a six-song EP, Successor, which featured live tracks, a pair of covers, and other previously unreleased material. Sonata Arctica were rewarded with various awards and honors around this time: Hard N' Heavy magazine voted them Newcomer of the Year, as did Emma, the Finnish Music Awards. Kivilahti quit the band in late 2000 and was replaced by Marko Paasikoski before work began on their second full-length album. With producer Ahti Kortelainen behind the boards, Sonata Arctica recorded Silence at Tico-Tico studios in time for a 2001 release. Winterheart's Guild and the Nuclear Blast-issued Reckoning Night followed in 2003 and 2004, respectively, and in 2007 the band issued their fifth full-length, the dark and aggressive Unia, which would serve as the last go-around for guitarist Jani Liimatainen, who would leave the group shortly after its release. New guitar player Elias Viljanen, who had been playing live with the group since Liimatainen's departure, would make his first album appearance on 2009's chart-topping Days of Grays. Longtime bass player Marko Paasikoski would bow out after the release of 2012's Stones Grow Her Name, making room for new bassist Pasi Kauppinen, who marked his debut on 2014's Pariah's Child -- that same year saw the release of Ecliptica Revisited, a full re-recording of their 1999 debut album. The aptly named Ninth Hour, the band's ninth studio long-player, arrived in October 2016 and promptly peaked at number six, their highest-charting internationally released long-player yet. After international festival and theater tours, the band re-entered the studio in September of 2018 to work on the album Talviyö, co-produced by Mikko Tegelman and the band. Sessions were completed in May, and a lyric video for first single "A Little Less Understanding," hit YouTube in June with the long-player following in 2019. ~ Andy Hinds, Rovi