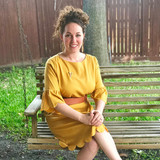 A nerdy mom who loves fantasy, composing book soundtracks is her heroine's journey. Kristina raised almost $100,000 to compose and produce the original book soundtrack to the New York Times best selling series, Green Rider, by Kristen Britain. What started as an idea to write an album to her favorite book expanded to art books, accessories, and other unique items that further immerse readers into the Green Rider universe. https://www.kristinaabishoff.com/green-rider A note from Kristen Britain, author of Green Rider: "I have mentioned now and then how music inspires my writing and has serves as a companion on many a novel ... Never had it occurred to me that my writing might, in turn, inspire ... a soundtrack for a novel! ... Each track is layered with nuanced emotion, at times dramatic or whimsical or triumphant ... The alchemy of music and image creates a spellbinding package ... I hope all ... enjoy this whole new dimension to their reading experience." You can find Kristina on Twitch writing more music, come and create with her! https://www.twitch.tv/kristinaabishoffmusic Kristina also wrote music for another book soundtrack, Kaladin, a book soundtrack that raised over $100,000 on Kickstarter to create music inspired by Brandon Sanderson's famous novel The Way of Kings. I've written music for Salt Lake Pops, Pretty Darn Funny web-series, commercials for businesses, and alternative pop artists including Robyn Cage.