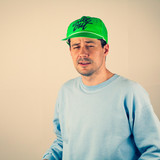 I don't mind if you consider my music background music, my goal is to provide music that enhances the atmosphere and encourages calm.   Uprooted from Melbourne, Australia and settling in Seattle as a teen in the early 00's, I navigated the turmoil of adolescence using music as my refuge and compass. As a kid I grew up playing classical piano and violin but I kind of hated it. To me it wasn't very exciting and it certainly wasn't considered 'cool'. It was the first time I picked up a beat up old Squire bass in middle school that I really fell in love with music. It just felt right in my hands. I've been hooked ever since!   At the conclusion of a ten year career fronting an indie-pop band, I decided to pursue a conventional songwriting career and in 2013 moved to Nashville but found the work to be unappealing and instead sought life experience procuring a local bartending gig and taking a short break from music.   I returned to music with a fresh sound influenced by my newfound love for bossa-nova and all things "chill". So following a year of monthly releases I put out a self-titled album "Lonely Benson" in April 2018. Very nice.   I returned to Seattle later that year with an unfinished album shared with Nashville based electro-psychedelic duo, “Low Talker”. The project was completed remotely over two years and culminated with the release of “Yesterday” on August 4, 2020.