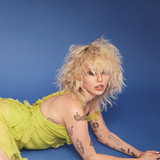 Miley Cyrus is one of the most influential artists in pop culture with about 130 million Instagram followers. She has six #1 albums including her 2013 GRAMMY-nominated album Bangerz, which is also certified 3x platinum in the U.S. In addition, she has had an impressive five sold-out world tours throughout her career. Last summer, Miley released, “Midnight Sky,” from her seventh album Plastic Hearts. The song went #1 on iTunes in 41 countries, and the self-directed video has amassed 138 million views . The second single released from the album, “Prisoner,” had massive fan reactions and features Dua Lipa. Miley also teamed up with Stevie Nicks for the “Edge of Midnight (Midnight Sky Remix).” Additionally, in 2020 summer she released critically acclaimed live covers of Blondie's "Heart of Glass" and The Cranberries' "Zombie," which are being referred to as the dawn of Miley Cyrus' best era, with her voice being hailed as perfectly suited for Rock & Roll. In November, Miley dropped her highly anticipated 7th studio album, Plastic Hearts. The critically acclaimed album debuted at #1 on Billboard’s Top Rock Albums chart, and sixth #1 album. The album, which features collaborations with Billy Idol, Joan Jett and Dua Lipa, gives Miley the most top 10 album debuts on the chart for female artists this century. Tracks on Plastic Hearts have been streamed cumulatively over 1 billion times worldwide.