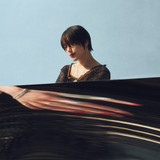 SSW / Trackmaker. Since 2017, She has been active as a solo under the name AAAMYYY. Officially joined 3 piece rock band ''Tempalay'' in June 2018, support member of "TENDRE", collaboration with various artists, models,