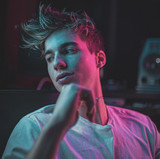 Adrian Fyrla is a young DJ/ Music producer with a style ranging from electronic music to dance music, exploring other sounds like future house and deep house. He is characterized by having a set charged with energy and a great connection with the public.  His performances in different countries of the world and having been living in cities like Toronto, Melbourne, Stockholm and Ibiza make Adrian Fyrla a mix of sensations and experiences in pure state.  He has participated in a multitude of large-scale events including White Festival where he has had the opportunity to share the stage with Steve Aoki and Juicy M.   Adrian Fyrla's music has been supported by DJs like Dimitri Vegas & Like Mike, Steve Aoki, Hardwell, Don Diablo, Showtek or Fedde Le Grand. Some of the most important electronic music record labels in the world: Revealed Recordings, Hexagon or Smash The House have believed in their music, signing popular songs on the dance scene and reaching #1 Beatport on multiple releases.  For Adrian the close contact with his fans is very important (teamfyrla), the close and constant treatment make him an influential person, able to inspire, motivate and help a lot of people.  Without a doubt, Adrian Fyrla is a new talent in the international music industry.