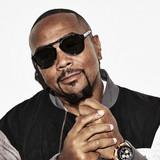 Dubbed the Emperor of Sound, Timbaland’ musical mastermind is behind the most memorable hits of our times. With over 18-Grammy nominations, 4- Grammy wins and 200+ ASCAP Music awards, his indelible imprint has been stamped on countless recordings from some of the most successful and legendary artists since the mid-1990s. From Jay-Z’s “Dirt Off Your Shoulder” and “Big Pimpin,” to Justin Timberlake’s “Sexy Back” and “Cry Me A River,” Aaliyah’s “One In A Million,” Missy Elliott’s “Get Ur Freak On” and “Work It,” Ginuwine’s “Pony,” and One Republic’s “Apologize” amongst many others, Timbaland’s credits have established him as one of the most iconic producers in the last 30 years.