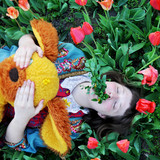 Alicia Edelweiss is an Austro-British musician based in Vienna. She started her musical career as a street musician and travelled all over Europe for two years, setting off at the age of 19. On her quest for freedom and travelling without any money, she pretty soon discovered her passion and talent for music. She recorded her first EP „I should have been overproduced“ (2012) in Portugal three weeks after she began writing songs at all, due to a friend she had just made that urged her to do so. The 7-track-EP was heavily influenced by the Anti-Folk movement in New York, which gave her courage to begin with songwriting. She also began to play the accordion during her time in Portugal, which would become her trade-mark. In 2016 she released her home-recorded debut album „Mother, how could you – a sick tragic comedy in 10 acts“ and also joined the band of austro-pop singer „Voodoo Jürgens“ from 2016-2020 as the accordionist. In 2018, her performance at the renowned Popfest in Vienna, accompanied by her new band on cello and violin, was described as “one of the most touching, most intimate and at the same time most entertaining performances of the whole Popfest.” In 2019 her long-awaited first studio album was released: "When I'm enlightened, everything will be better". The release was followed by a release tour around Austria and Germany, including a performance at the Elbphilharmonie in Hamburg, and would have led her to UK, Italy and Peru if Corona hadn't gotten in the way.