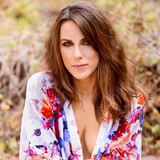 Gretje Angell, the daughter and granddaughter of drummers, was born to sing jazz. Her alluring voice has a beautiful tone, she digs into the lyrics that she interprets, and she is a superior scat-singer. For her debut recording, In Any Key (named cheekily after Dori’s ability to play any song in any key at Gretje’s behest), Ms. Angell is joined by guitarist-producer Dori Amarilio, Chuck Berghofer, Kevin Axt or Gabe Davis on bass, drummer Steve Haas, percussionist Kevin Winard, and a few guest musicians. Gretje Angell was born in Akron, Ohio and early in life she regularly accompanied her father to jazz clubs for his gigs. She learned to play string bass and cherishes her memories of playing with her father at jam sessions. She studied classical music in college, spent time away from music, moved to Los Angeles, and became an important part of the local jazz scene. In addition to leading her own groups, she has sung with the Ladd McIntosh Swing Orchestra, Jack’s Cats, and Glen Garrett’s Big Band, also being active as a soprano with the Los Angeles Metropolitan Opera Company.