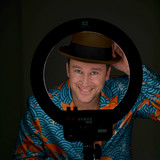 Singer songwriter Samy Danger, the half German half American globetrotter from Munich, returns with his third studio album “Birds” in his backpack. On this trip borders are irrelevant! This is an LP that ranges from soft to hard with a mix of singer songwriter, indie-rock, folk and blues. It’s significantly louder than its predecessor and always on the outside of any genre-bubbles. A classic rock trio navigates in the cockpit with Captain Samy Danger on vocals and guitar, Uwe Breunig (“Kontra K”, “The Ruffcats”, “SIBC”) on drums and Martin Baumgartner (“Bausa”) on bass and synth. Also on board, Paco Mendoza („Ragggabund“) who helped to produce the vocals. With such a great crew you can look forward to a flight over uncharted seas: calm, strong and deep; stormy, wild, and tempestuous. Together with his reggae/pop band JAMARAM, Samy Danger has been on tour as a songwriter, guitarist, and singer for more than 20 years, playing thousands of shows throughout Europe, Africa, and South Amerika. Having worked on numerous intercultural projects with the Goethe Institute and musicians from Colombia, Uganda, and Zimbabwe, combined with trips from Bavaria to Berlin and into the darkest corners of the Peruvian jungle, Samy Danger has a lot to sing about and it goes without saying that the year 2020 couldn’t clip the wings of a creative mind.