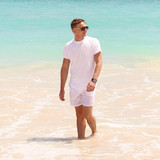 Hailing from Poland, Drist is an emerging DJ and producer who focuses mainly upon blending progressive sounds with classical instruments, such as piano notes or string samples, giving his EDM productions a unique and classy house vibe. Having started out as a house DJ from an early age, Drist eventually drifted away from the music scene for a relatively long period before recently reigniting his passion just a year ago. Since his return, Drist has spent countless hours honing his production skills in the studio and proudly debuted his first single in August 2019. Since then, Drist has released twelve tracks, inspiring Drist to continue to pursue his passion of music production. Not one for slowing down, the Polish artist now has few new tracks in the pipeline for the rest of 2021 and it is safe to say he is well and truly back in the game.