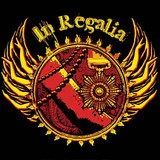 Based in the city of Mumbai in the western part of India, InRegalia is a band which plays Classic and Alternative Rock with elements of Indian classical music. The band was founded by guitarist Vijay Fernandes. They were later joined by vocalist Peter Abraham, drummer Warren Swaries and Keith Pereira on keys and Saurav Das on bass.

The band has been active on the Indian indie circuit playing at a number of venues in their home city and across the country. The band has received positive reviews and coverage in the press and their music has been aired on over 200 indie radio stations and podcasts worldwide.