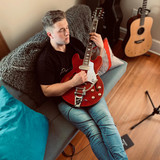 Bravo Wilson is a young singer, songwriter and musician with a new six-track EP, [+] Love. Plus Love features all original music and Bravo’s unique sound--contemporary R&B with a modern pop vibe. Plus Love is side A of two EPs exploring songs about love won and lost. Bravo grew up on the East Coast, singing in public school choirs and learning guitar from John Mayer’s teacher (Al Ferrante, guitarist for Edgar Winter). He quickly gained attention for his powerful vocals and guitar chops, enough to warrant admission to the prestigious Berklee College of Music. He went to Loyola NOLA for a year before transferring to McNally-Smith in St. Paul, MN. With the close of McNally, Bravo headed to LA to hone his production skills at Cre8/Westlake Studios. LA opened up a world of opportunities and this is where he started songwriting and recording in earnest. His first songs Clementine, You Not Goin’ and Come Here were written and recorded during this time and formed the basis for his personal style--West Coast soul. Back East, he’s recorded at Quad NYC with Lucius Page (Solange, Ashanti) and worked with Raleigh the Vamp (AAD, Travis Mendes) to master [+] Love. The B side, [-] Love, coming soon, was entirely recorded, produced, mixed and mastered by Bravo. Bravo is constantly writing and producing new beats, synchs and songs. He is inspired by many artists, particularly the soulful honesty of Anthony Hamilton, Seal’s rich vocals and the independence of rapper Russ.