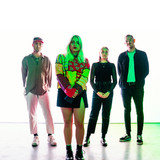 Fresh off the back of releasing their addictive single ‘YOU’ and making their return to live stages with THE VANNS, Eliza & The Delusionals return with more new music to satiate fans and newcomers alike. The band’s latest single, ‘SAVE ME’ comes wrapped up in the brand of ‘90s / early ‘00s nostalgia they have endeared themselves to audiences with, while layering their own flair throughout. With ‘SAVE ME’, the group steps things up once again: the vocals swirl and filter through a dream haze of an arrangement beautifully, producing a sense of yearning that’s irresistible to listen to. Written by Eliza Klatt and Kurt Skuse between sessions in Los Angeles with songwriter, musician and producer Keith Harris (Black Eyed Peas, Madonna) and then at their home studio in Australia, ‘SAVE ME’ changed all but slightly from its origins to the final version we’re hearing today. ‘SAVE ME’ was recorded in Brisbane, between Airlock Studios and the studio of award winning producer and engineer Kon Kersting (Tones And I), who was with Eliza & The Delusionals each step of the way. Also working with Leon Zervos (Troye Sivan, Holy Holy) on mastering, the sound Eliza & The Delusionals have continued to hone with this new song is gorgeous, glossy and refined.