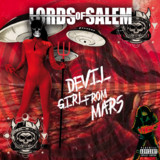 When an equally rough and pally end-time bunch brushes ‚DEAD POP SEX ACTION‘ as a musical style on its skull-embroidered Rock'n'Roll flag, it's time for a collective uproar! And if those passionate tattoo maniacs in their ratty rags also look as seriously determined as the LORDS OF SALEM - freaking f***ing yes, then of course, you‘ve got to pump it up a whole lot louder! In the middle of the tasteless, barren no-man's-land of the diluted mainstream, the charismatic four-piece strikes in the scene. LORDS OF SALEM let a massively invigorating overdose of the spark spraying 80s HARD ROCK flare up out of the amplifiers with the EP "Hell Over Salem". Electrifying songs come to life with a beguiling dark-occult touch. Lascivious, tongue-in-cheek songs that could not possibly be firmer, juicier and more compelling. The casual thoroughbred rockers are saying about: "We do not need big, inflated words to say anything about it. What we want to convey as a band is, after all, the good old spirit of eternal Rock'n'Roll, and that with an explicit 'All Night and Party' factor!" As a marketing strategy, fraudulent cunning fashion rockers, pseudo-rebellious leatherjacket-weekend-wearers, unspeakable trend-clowns and other little softener-boys are tearing holes in their new jeans, like to call that kind of appearance and music-making 'vintage' and thus are queuing up rather pettily into an artificial genre zeitgeist.