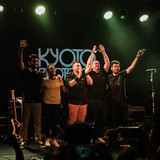 Not to be mistaken for members of Greenpeace, Kyoto Protocol is a rare story of the underdog. This was a rock band that started out doing covers in the Kuala Lumpur pub circuit and managed to breakthrough with sheer determination, eventually opening for their heroes such as The Killers, Death Cab for Cutie and Tenacious D in their home country. They moved onto making their own tours in Malaysia and eventually Asia, organically building a loyal fanbase along the way. In 2021, the band re-ignited their creative streak, with the new single Nothing Lasts Forever after the many lockdowns in Malaysia gave the members some the time and space needed to pen a string of fresh material. This is their first release since 2018's The Pen Is Mightier, which was received with aplomb with the album picked as one Bandwagon’s ‘Best Releases of 2018’. The album's most successful single, The End, peaked at number 31 on the Spotify Top 50 Viral Tracks.