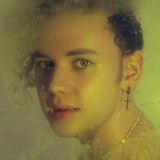 At age 11, Toronto's Francesco Yates learned that music could be a viable career.

Wielding a formidable falsetto and a love for funk, he hooked up with Pharrell Williams -- playing guitar on Williams' song "Gust of Wind" with Daft Punk -- who went on to produce Yates' first album along with Robin Hannibal (Kendrick Lamar, Jessie Ware, Cee Lo). His self-titled EP was released in 2015, and featured singles "Call" and "Better to be Loved" eventually leading to a Heatseeker award at the Canadian Radio Music Awards.