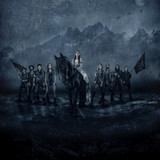 From their debut »Spirit« (2006) onward, theirs was an approach of respect, historic accuracy, depth and the most thrilling, catchy, primordial melange of Melodic Death Metal and Pagan Folk the world could have ever imagined. Their groundbreaking work »Slania« saw them bond with Nuclear Blast and quickly turned the band into a worldwide phenomenon. In a two-year-succession, they unleashed »Everything Remains (As It Never Was)«, »Helvetios« and that massive monument of all things Folk Metal called »Origins«, framed by the two elaborate acoustic albums »Evocation I – The Arcane Dominion and »Evocation II - Pantheon«. On each release, they refined their trademark brand of Chrigel’s thundering roar, metallic fierceness and folkloric ingenuity. In 2019, they look back upon seven studio albums, as well as tours around the globe and slots at all Metal festivals. Now the stage is set for the thunderstorm that has already been heralded by the tempestuous harbinger »Rebirth« in late 2017. Finally, everything is prepared for the colossal voice of the ages that is »Ategnatos«. On an album both mystical and philosophical, ELUVEITIE propel mythology, pagan belief and spirituality into our modern world. “Ategnatos is the Gaulish word for ‘reborn’”, Chrigel explains. “To the sharpened mind, it points out the concealed, long forgotten key to change and renewal.” This, naturally, comes at a price. “There's always suffering before bliss. And always darkness before light.”