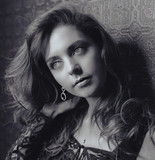 My name is FiCat – pronounced “Fee Cat” :) I'm from Dublin and I write electronic Pop music. My inspirations are include Sia, Rihanna, Madonna, Britney & Tina Charles.   My musical creativity has taken me all around the world. I recorded my first EP in Nashville. A few years later I became the lead singer of an Irish electro-pop band called ‘Toy Soldier’. I loved being in a band. We had so much fun gigging around all of Ireland's music venues from Dublin's 'Whelans' to Cork's 'Cyprus Avenue'.   In 2015 I moved to Berlin and spent 3 years writing music and playing gigs with a post-grunge band called ‘Coma_54’. I loved playing gigs as part of the underground music scene in Berlin and Munich, these were some of my favorite memories 🎶   All of this experience has allowed me to develop a new electro/melodic sound. I’ve teamed up with Irish based producer Diffly to create catchy pop tunes that tell tales of love, lust and heartbreak. If your Irish, you may have heard my first single 'All My Love' on the radio last summer. It was played on Spin1038, BeatFm & Fm104. My second single 'Deja Vu' was playlisted on 2Fm for 3 consecutive weeks. I am so grateful for the radio support 🙏   I hope you like my music. Follow me and let’s be friends ❤