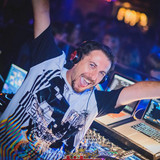 Dj Karl8 dj & producer from 1991. Born in italy but citizen of the world, now based in Mallorca. In his career he played in more than 2000 clubs all over the world like Queen,Jimmyz Monaco,Shu,Holliwood,Pacha,Tocqueville,Thunderdome,Q,Cielo,Club 101, and in the most famous European festival like Defqon1 and Street Parade. He produced over 350 tracks and he won 2 gold discs one in 2012 for the project Stars and one with the remix of What's up in 2016. in His career he sold more than 2 million copies all over the world with his productions and he has actually more than 200k followers in the social network. He remixed a lot of great artist like Linkin' Park with the song A light Never comes, Katy Perry with the song Dark Horse, Groove coverage and much more. His last song Hit me 2017 done with the legends of the house music Lenny Fontana is now actually in the club charts of America ,Italy and Russia and has over 100k plays on Spotify. He is now working to a lot of new projects that will be out in december, the Production with Angelo Ferreri and Monoside rec I was funky reach n11 in the Traxsource chart. He also have in the chart on Traxsource and Beatport the remix of Ramon Riera called Run,he also produced for Purple music I can do Magic, that reach n7 in the club chart. From 2016 he is resident of the worldwide famous club Nikki Beach Mallorca He is the founder and producer of PROYECTO FENOMENO   www.karl8.com       https://www.instagram.com/djkarl8/