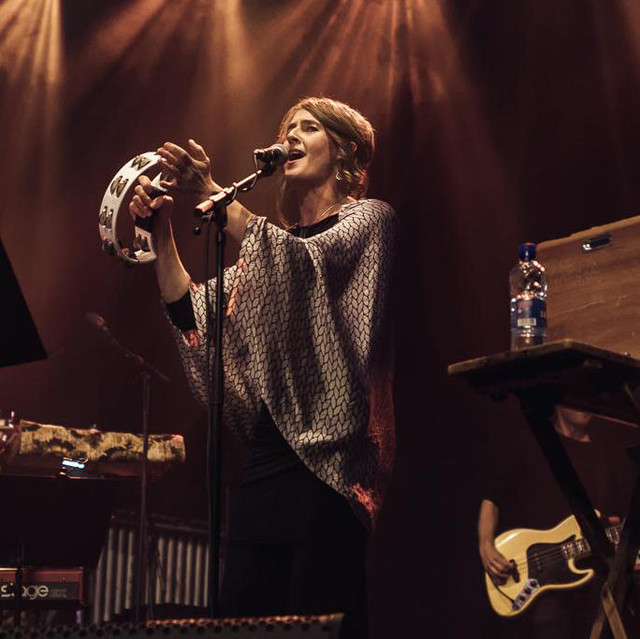 An award-winning Scottish folk singer who draws from jazz, country, pop, and traditional Scots music sources, Karine Polwart initially gained prominence as the lead singer for the Scottish folk band Malinky and as a member of Battlefield Band before striking out on her own in 2004. Since then she has released several acclaimed solo albums, including Scribbled in Chalk (2006), Traces (2012), and Laws of Motion (2018). She is also a member of the eight-piece Scottish-Canadian folk supergroup The Burns Unit. From Banknock in Stirlingshire, Scotland, Karine Polwart was a late developer in musical terms; she was nearly 30 before she became a professional, nervously launching a career initially built on traditional Scots music, for which she showed such natural aptitude. She also began putting her faith in her own songs and later remodeled herself as a singer/songwriter. Many of the songs she subsequently wrote were drawn from her experiences as a social worker specializing in domestic and child abuse cases for the Scottish Aid women's movement. She'd previously earned a politics and philosophy degree at Dundee University, worked in a primary school and played in a variety of semi-pro bands before coming to more prominent attention in the groups Malinky and MacAlias. Malinky, in particular, gained a strong following after two well-received albums, Last Leaves (2000) -- which includes her first recorded original song, the trad-styled "The Dreadful End of Marianna for Sorcery" -- and "Three Ravens" (2002), on which her subtly emotive vocals were a key ingredient. The MacAlias duo with Gill Bowman also showcased her talents across a broader musical horizon, encompassing both her and Bowman's original songs alongside Robbie Burns and the Scottish tradition. Their album High Wired (2000), which includes one of Polwart's signature country-flavored songs, "John C Clarke," is much underrated. She also spent 18 months touring with the legendary Battlefield Band following the illness and subsequent death of Davy Steele and was featured on their 2001 album Happy Daze. After six years as lead singer with Malinky she reluctantly quit in 2004 to concentrate on her career as a singer/songwriter following the release of her debut solo album Faultlines. She was full of misgivings, unsure whether her new contemporary approach would find favor with audiences used to hearing her sing traditional material. "It was mad to give in my notice to Malinky because I didn't know if the solo thing would work and I had nothing else to fall back on but I just felt I had to give it a go," she says. Initially the signs weren't good, but a plethora of nominations at the 2005 BBC Folk Awards gave her a massive boost. She ended up winning three awards, for best new act, best album and -- most importantly to her -- best song, for her moving depiction of a woman devastated by her partner's alcoholism, "The Sun's Comin' Over the Hill." From that point her career took off in spectacular fashion as she made dents in mainstream radio and she played bigger concerts, backed by a band who included Inge Thomson on accordion, Kevin McGuire on bass, brother Steve Polwart on guitars, and Canadian husband Mattie Foulds on drums. Her second album, Scribbled in Chalk (2006) followed a similar pattern of graphic story-songs encompassing tough topics such as sex trafficking and the holocaust yet were couched in strong melodies and immaculate song structures. She again took home the award for best song (for "Daisy") at the 2007 BBC Folk Awards, and spent most of the rest of that year on maternity leave after the birth of her son Arlo. However, that December she issued a sparsely-arranged album of predominantly traditional material entitled Fairest Floo’er.

The sole original composition on the release was the closing track, “Can’t Weld a Body” which had initially been featured as part of the BBC’s revival of the radio ballads series in 2006.