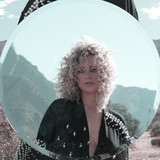 Gritty honesty and a show-stopping voice affirmed CAM’s place in the modern country vanguard as a GRAMMY® Award-nominated multi-platinum headliner. The singer & songwriter carries on traditions of Nashville storytelling spiked with a fresh spirit of empowerment. The artist’s presence quaked country to its core on her 2015 full-length debut, Untamed. Not only did it bow in the Top 15 of the Billboard Top 200 and register at #2 on the Top Country Albums Chart, but it also yielded the double-platinum smash "Burning House"—nominated for “Best Country Solo Performance” at the 2016 GRAMMY® Awards.

To this day, “Burning House” remains the “highest-selling song by a female country artist since its release.” Her second single "Mayday" fueled her rise as she also co-wrote "Palace" for Sam Smith and recorded her own seismic rendition. Recognized as a powerhouse on stage, she canvased the globe multiple times, performed alongside Smith at London’s O2 Arena, supported Harry Styles at The Ryman Auditorium, and more in addition to delivering standout sets at festivals including this year’s coveted sunset slot at Stagecoach. She also reached arena status internationally, headlining top venues across Europe and Australia. In 2019 she teamed up with Diplo for the Thomas Wesley debut, "So Long (feat. Cam)," breaking boundaries and showcasing her range. Speaking her mind and holding nothing back, CAM steps up as country’s fieriest female ready to make history.