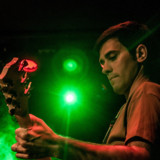 Born in Buenos Aires, Argentina, Darío Imaz cultivated a passion for music at a young age, and with the digital release of his debut album, he has reached a peak moment of inspiration and motivation. When he was only eleven years old he began to play the guitar and was even playing in bands before he became a teenager. From the beginning he possessed an ear for melody that continued to grow as he created his own compositions. After playing in a variety of bands, and bent on developing a singular sound of his own, Dario decided to create his solo project. After traveling extensively, he settled down in Japan, where he is currently promoting his second album SINCROMELODY. ​ ブエノスアイレス生まれ。 幼少の頃より音楽に対する情熱を培う。11歳でギターを弾きはじめ、12歳でバンドに参加。当初よりメロディーにとりつかれ、後に自身で作曲を手掛けるようになる。アジアの文化に魅了され、日本へと辿りつく。自身の音楽的能力の限界に常に挑戦し続け、パフォーマンスライフの新しい展望となる Dario Imazの結成に至る。