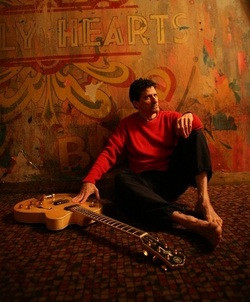 As a composer, Vinícius Cantuária had success with "Lua e Estrela" (recorded by Caetano Veloso in 1981), "Coisa Linda," "Só Você," and "Na Canção" (recorded by Fábio Jr.). He was praised as a composer/interpreter with Sol na Cara, released in the U.S. Cantuária moved to Rio de Janeiro RJ with his family at age six. He joined O Terço in the late '60s, participating with them in the International Song Festival. In 1972, he became a sideman for several artists like Luiz Melodia, Jorge Mautner, Gilberto Gil, and Caetano Veloso. Cantuária recorded his first solo album in 1983, Vinícius Cantuária. He then toured internationally, accompanying Chico Buarque. In 1989 he performed for about a year in Portugal, recording an album there. In 1993 he recorded the album Tigres de Bengala, with the Homonymous All-star Band (Ritchie, William Forghieri, Cláudio Zoli, Dadi, and Mu). In the '90s, Vinícius Cantuária moved to the U.S, where he has released five immaculate studio albums including Sol Na Cara, Tucuma, Vinicius, Horse & Fish and Silva.