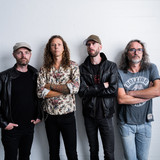 Grande Royale is a rock’n’roll band who find their roots in the early 70’s rock scene of Detroit and the 90’s rock scene in Scandinavia, mixed up with some vintage pop. The music is straight forward rock’n’roll packed with electric guitars, melodic vocals, and thundering bass lines. Grande Royale is wild and savage rock for a new generation! The band's fifth studio album 'Carry On' was self-produced and released in 2021. The track 'Just as bad as you' feature Dregen on guest vocals. The album has a rawer approach than Grande Royale's previous releases, with more electric guitars and an honest and direct feeling all over it. The album was mixed by Robert Pehrsson (Robert Pehrsson Humbucker).