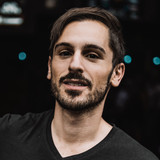 Progressive-pop singer/songwriter, Brett Miller's greatest asset is his vocal versatility. Putting his vocal aptitude and song craft at the forefront, Brett’s legacy will be defined not by his confinement in one singular genre, but by his ubiquitous identity inside many. With a sound mind and the fullest of intention, Brett constructs his catalog to fit right on the borderlines separating several popular genres. For Brett, the beauty of pop music in this era is that it is inherently undefined. It always changes. It’s the artists themselves that define it, and Brett is surely leaving his mark. He has collaborated with EDM producers, hip-hop artists, several other gifted pop songwriters, while also baring his soul in solitude as a singer-songwriter. Miller’s tonal palette and penmanship proves to know no boundaries, and he’s only just begun. Welcome to the future of music. This is Brett Miller.