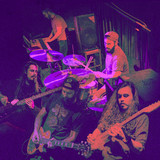 What started as a few joke songs just for fun has morphed into a full-fledged, 5-piece, eclectic powerhouse. Based out of Denver, shwarma's history spans back 4 years with revolving lineups and different live show techniques. Lead by Jackson and Pieter, who both write, record and produce the music themselves, the band spans many different genres and sounds, which the duo agree they could not live without. Their musical influences pour into the sound to blend a briny mixture of psychedelic, latin, funk, jazz, groove, grunge and sludge among other feels and textures. The band performed initially as a duo playing along to backing tracks, but later brought in drums, keys then bass to embrace the full band sound and let go of a computerized live performance. Currently the band is working on their fourth release and looking to get on the road and tour when the time is right.