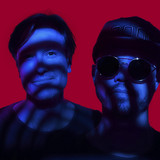 Housequake has been a driving force behind the evolution of house music in Holland since its inception. Behind the name stands two visionaries of the Dutch club scene -Roog and Erick E. Both began their careers in the mid-nineties, with Roog pioneering multi-deck performances and producing soul-driven house music whilst Erick E began spinning at Amsterdam’s legendary RoXY club. Today, both still perform in excess of 100 shows a year, but always return to Housequake as an essential outlet for capturing the true spirit of the party.