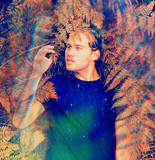 Manchester-born singer/songwriter, Matthew Adam Green's brand of wistful indie folk owes as much to the road as it does to contemporaries Ben Howard and Bon Iver.   Years ago, in southern Vietnam, a fellow musical nomad discovered Green and a bunch of friends penning a tune based on the graffiti-clad walls of a hostel. The conversation that followed may have been simply an inspiring nudge in the right direction from a stranger, but to Green it was the moment that steered him away from a future of songs that never made it out of the bedroom, towards a thriving Melbourne music scene where he formed Fool Child with close friend and producer Avro Arvo.   After enjoying a string of sold-out shows alongside Triple J rotation with the indie-pop band, a tricky visa situation prompted the artist's departure from Melbourne. Leaving behind a lot more than with which he had arrived, a melodic voice note captured on the plane home saw the artist musing 'into unknown, into distance, into life'. The concepts behind this mantra began cropping up everywhere in his output, ending a long period of writer's block and eventually informing the basis of a new collection, his proudest works to date.   Green’s latest single, ‘What Have We Become?’ blends folky melodies with a more progressive folktronica production whilst asking the timeless question of why a relationship is failing.