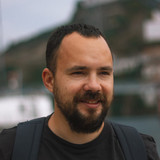 João Balouta is a Portuguese Classical Crossover composer, specialized in modern piano music creation with more than 50 songs, including 2 albums released worldwide, through all major platforms, since 2017. Held concerts in Portugal and Spain. What's his story? When João was 17 years old, he just discovered his talent for music, when suddenly, he listened the famous Amelie's movie soundtrack. That was the click, when João decided to learn that song on piano, finishing it in few days, without ever playing piano before. After that, he developed his technical skills learning other piano songs, from classical to neoclassical composers. The most interesting part of it is that, when João was learning those songs, he just couldn't stop creating new variations on them. That was the beginning of his journey, mainly as a piano composer.