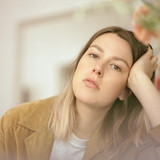 For the millions of people who have already been introduced to Gabrielle Shonk via ‘Habit’ –her instantly arresting first single -the immediate impression is of a new voice arriving so fully formed, so polished and powerful, one can only ask ‘where has she come from?’ Raised in Quebec City, Gabrielle Shonk is the natural product of a creative household, with a blues-musician father and artist mother. Shonk has been singing since anyone can remember and started writing her own songs as a teenager, Aretha Franklin and Marvin Gaye providing soulful guidance, Joni Mitchell, Bob Dylan,and Tracy Chapman teaching subject matter, and The Beatles impressing melody.

The craft took hold and she went on to studying Jazz and earning a degree in music. Putting her education to practical application, Shonk honed these skills paying her dues on the club circuit around Quebec City. “Jazz works with a palette of colours which heighten the emotional content of a song,” she observes. Billie Holiday and Chet Baker have in particular influenced much of Shonk’s thinking on the technical aspects of music and, while performing the standards elevated her vocal chops, writing her own, original material brought her into sync with her muse –a heady blend of soul-infused folk where melody shines atop a lively groove. “Music inspires me to make music...sometimes the sound of a guitar on a recording inspires me to write a song,” declares Shonk, who views herself primarily as a composer of melodies.