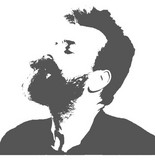 Nick Tann has worn many musical hats, and occasionally actual hats as well.

He has wielded all manner of instruments, but is best recognised in the guise of solo, acoustic guitar slinging, jazz tinged, folk-pop performer. And it is that more familiar sound which forms the basis of the new look and sound of Nick Tann and his new band. The “new” Nick Tann is a numerically fluid affair but is normally a triptych of Nick Tann on guitars and vocals, Bastien Terraz on double bass and Guy Siviour on drums/percussion. However some shows may contain fewer players or perhaps expand to include occasional itinerant musicians collected along the way. Life may indeed be like a box of chocolates. The calling card for this new format is the recent release Authentic, an album which takes Nick’s impressive song crafting and explores the space around it through deft and dexterous additional musical textures and hues. At the heart of the sound is the familiar balladry, emotionally driven personal narratives and rich vocal tones from solo days but now there is some wonderful musical augmentation. A chilled yet structurally robust British folk take on Americana heartland traditions and whilst the familiar building blocks of Jazz, blues and country all play their part it is a wholly new sonic architecture that is the end result. The diary for 2018 is already starting to fill with some exciting new festivals and venues both home and abroad.