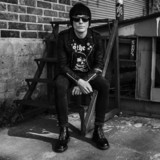 Musically rooted in old school punk rock with a touch of ska, power pop and garage rock – Gatuplan delivers politically and emotionally charged songs with an attitude. Gatuplan, translating to street level, is a solo project by Inge Johansson - a Swedish musician with a background in several internationally recognized punk bands. Debuting in may 2019 with the single PUNKHJÄRTA, followed by a couple of self released singles, Gatuplan signed a record deal with swedish indie label Sound Pollution in 2020. The first full length album “KAMPEN GÅR VIDARE!” is due to be released in February 2021.