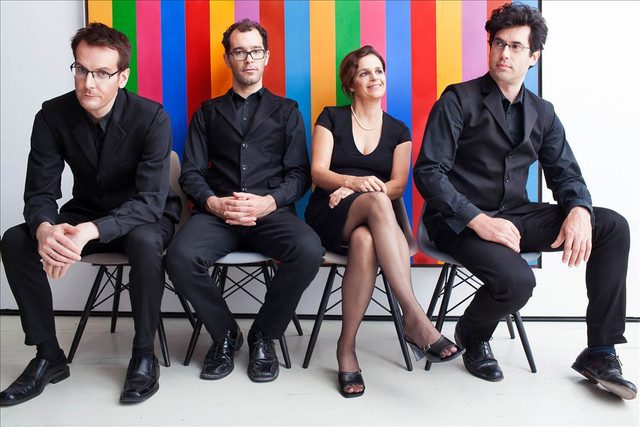 Canada's Quatuor Molinari (or Molinari Quartet) has been one of the few string quartets in Canada to cultivate a specialty in music of the 20th and 21st centuries. The group has especially championed new Canadian music, commissioning new works and often performing and recording the string quartets of composer R. Murray Schafer. The Quatuor Molinari was formed in Montreal in 1997 by violinist Olga Ranzenhofer, a graduate of the University of Cincinnati who had studied with the noted American violin pedagogue Dorothy DeLay. All four members have played with prominent Canadian orchestras, and second violinist Antoine Bareil, violist Frédéric Lambert, and cellist Pierre-Alain Bouvrette were all recent graduates of Canadian conservatories. From the beginning, the quartet has focused on contemporary music. The group entered the studio early, recording Schafer's first seven string quartets for the Quebec label ATMA Classique, and it has remained associated with that label, also recording for the label of the Canadian national broadcaster CBC. The quartet is the only one to maintain all 13 of Schafer's quartets in its repertory (the Eighth, Tenth, and 13th were written for the group), and it has also commissioned or given world premieres of works by many other Canadian composers, including Otto Joachim, Nicolas Gilbert, and Laurie Radford. Founded in 2001, the Molinari Quartet International Competition for Composition has served to generate a large amount of new music, receiving some 850 new scores as entries during its first six years of existence. The quartet's repertory and recordings, however, have featured modern string quartets from many countries and time periods, including those by Bartók, Shostakovich, and Sofia Gubaidulina, whose complete works the quartet recorded for ATMA Classique in 2015. The Quatuor Molinari is a frequent presence at North American and European concert series and festivals, including Radio France's Présences in Paris, the Le détour de Babel festival in Grenoble, France, and the Toronto Summer Festival. It has mounted tours of China (in 2013) and Poland and Armenia (in 2016). The Quatuor Molinari issued an album of chamber music by American composer John Zorn in 2019.