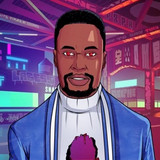 Sondrey is an up and coming pop artist at the Norwegian scene within Pop, R&B and hip-hop. Known from talent shows such as The Stream, X-factor, Stjernekamp where he finished in 3rd place and competed in the Norwegian finals of Eurovision (MGP) with his single "Take My Time", he has emerged as fresh breath to the music industry, not just as an artist, but as a songwriter and producer as well. Collaborating with artists such as Rebecca Black on their single «Scream» and writing one of songs to the album og the famous female K-Pop group known as LOONA, has started making his mark in the asian music industry. From 2018-2019 he attended the school known as LIMPI founded by Stargate where he discovered his passion for analog synths, Japanese culture, experimental R&B and hip-hop. In 2020 he has played the role of Tony in the famous and classical play «West Side Story». His upcoming album is to drop in 2021 with the title already revealed to be called «Insomnia»