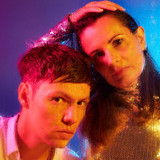 Future RnB / Avant-pop With their debut EP Videos, singer Daniela Sarda and drummer/producer Rico Baumann entered the Swiss music scene as True with a bang and established their trademark sound, mixing electronic pop with left-field R&B. Their first singles immediately got picked up by BBC on-air personalities such as Huw Stephens and Lauren Laverne, in continental Europe Mtv and Viva have been putting their videos on spin, while heatseeking blogs from the USA, South America and Asia supported every single track the band released. In roughly a year's time TRUE have positioned themselves as one of Switzerland's key electronica exports. In 2016 True released their debut album Wrapped In Air to raving reviews. German pop magazine Intro described it as „hip and timeless at once, synthetic on the outside yet deeply emotional at the core“, while several Swiss radiostations and newspapers included it in their yearly best-of lists. Their mix of club ready bangers and introspective experimentation was compared to artists like Kelela, Empress Of, FKA twigs and Blood Orange.  Following the albums release, True played a tour that included big festivals (Zurich Openair, St Gallen Openair, M4Music) as well as artsy underground clubs. True was rewarded with the Swiss Live Talent Award for Best Live Act and opened for international acts like Sylvan Esso and MS MR. Their latest album Made Of Glass was released in November 2019 on Mouthwatering Records.