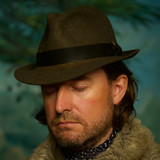 The alter-ego of Melbourne, Australia-based film composer, singer and guitarist Paul Gillett (Ang Fang Quartet, La Mauvaise Réputation), Floyd Thursby has been recording and releasing his original songs since 2005. Thursby’s debut album A Thief's Journal produced by Marty Brown (Art of Fighting, Clare Bowditch), was released in 2007. His second album Sinatra's Bones was released in 2013. In 2016 he composed the score to the Australian feature film The Death & Life of Otto Bloom’ (d. Cris Jones) and a soundtrack album Omnia Aeterna (Music from the Film "The Death & Life of Otto Bloom") was released the following year. His album To Those in Flames was released in 2019, also produced by Marty Brown. In 2020 Floyd released The South Lands, an Australian-Vietnamese collaboration with Hanoi singer-songwriter Mademoiselle. ‘To those in flames’ ALBUM OF THE WEEK: “a heartfelt collection of tracks, honed with the sweetest of attention to detail in the studio. While lyrically there’s much to enjoy here, Thursby’s guitar playing, on the title track in particular, are quite simply moments to savour. 3.5/5” The Age ‘Floyd Thursby has a fascinating voice... But of course, all that would be insignificant without great songs as vehicles for that voice.

Thursby has armfuls of them.