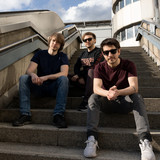 Since its conception in 2019, the Berliner power trio has been going full speed ahead to present rock music fans with a colorful and melody-centered repertoire ranging from high-energy electric guitar tunes all the way to mellow piano ballads. Their debut album ‘Step in the Light’ came out in May 2020

and was subsequently featured in the renowned online portal Musikblog.de. The band’s latest single/music video ‘Late Riser’ quickly became a success story with reaching 20k+ views on YouTube and 10k+ streams on Spotify. The song was featured in multiple European music blogs and on Alex Berlin Radio as part of the ‘Best New Bands’ program. “The Midnight Shower’s new single ‘Late Riser’ is an instant alt-rock classic! You’ll find that the chorus gets stuck in your head from the very first listen, as the guitar picks up and the backing vocals join in, and yet ‘Late Riser’ lends itself to a re-listen… and another re-listen… and another re-listen – Get your air guitars ready!” Indie Republik online magazine