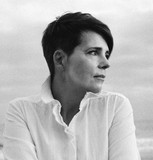 Website: donnamckevitt.org   Donna McKevitt is a British composer of classical and electronic music.  She was a member of Miranda Sex Garden between 1991 and 1994 recording Iris, Suspiria and Fairytales Of Slavery with them for Mute Records. She has worked as a singer and violist with artists including NickCave, Tricky, Moby and Michael Nyman.   Donna worked with Derek Jarman on his final film ‘Blue’, and following his death she set a number of the poems from his diaries and scripts for voices, viola, and cello. The resulting album, Translucence, featured the talents of Michael Chance, Melanie Pappenheim and Caroline Dale, and was released in 2005 on Warner Classics to widespread critical acclaim.   Her EP, Cut, a collection of modern orchestral pieces with solo violin, piano and voice, was released in 2015. Followed in 2016 by This Is What I Wanted to Give You… the setting of five poems by Jan Noble.  2018 saw her release her solo classical-electronic EP Gloriana.  In addition to her commercial releases Donna has a wealth of experience composing for contemporary dance, radio plays, and moving image. She is a regular collaborator with fashion photographer Emma Summerton, scoring for numerous global Vogue editorial films. She also provided the score for the feature film 'The Fold' directed by John Jencks.    This year she has written three new film scores, choral pieces for The Gesualdo Six and The Marian Consort and her new EP Wave is out now.