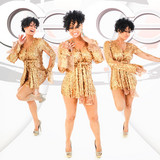 Disco diva CeCe Peniston seemed poised to become that genre's reigning crossover attraction. She was born in Dayton, OH, but her family moved to Phoenix when she was nine. Peniston was crowned Miss Black Arizona in 1989 and signed with A&M in the early '90s. Her debut, Finally, was a gold album; it peaked at number 36 on the pop charts and even landed a Top Ten pop hit with "Finally" and Top 20 pop single "We Got a Love Thang." After Thought 'Ya Knew in 1994, Peniston issued 1996's I'm Movin' On. Peniston continued to sing into the new millennium and regularly plays shows in Las Vegas, Atlantic City, and San Francisco. Not entirely part of the mainstream that brought her success in the early '90s, Peniston's work is remixed and remains a favorite in dance clubs around the world. ~ Ron Wynn, Rovi