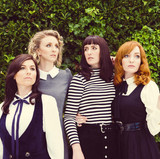 All Our Exes Live in Texas

Featuring All Our Exes Live in Texas

An Australian folk-pop outfit featuring four top-tier singer/songwriters from Sydney, All Our Exes Live in Texas' lush four-part harmonies, deft songwriting, and instrumental prowess have drawn comparisons to artists like First Aid Kit, the Waifs, and the Staves. Formed in 2014 around the talents of Hannah Crofts (ukulele/vocals), Georgia Mooney (mandolin/vocals), Elana Stone (accordion/vocals), and Katie Wighton (guitar/vocals), the group soon became a staple of regional festivals and toured alongside a wide array of artists, including Nathaniel Rateliff & the Night Sweats, Passenger, Tiny Ruins, and even the Backstreet Boys. After releasing an eponymous EP in 2016, the group made its first appearance overseas at that year's South by Southwest festival in Austin, Texas. Their debut studio long-player, When We Fall, arrived the following year. ~ James Christopher Monger, Rovi